I'm a little too proud at the title of this post. (Immersed once more in language school, otherwise dreadful jokes take on a strange hilarity as we're still unable to articulate anything genuinely witty...) Nan (なん) is the Japanese for 'what?' and combined with the 'ji' of kanji, it describes my confusion at some of our teachers' explanations.

Some kanji make perfect sense, and these are always easiest to remember.

Student (gakusei) is a combination of 学 (gaku) meaning study, and 生 (sei), meaning born: 学生 - gakusei, born for study. Teacher (sensei) uses the same 'sei' kanji - 生 - but prefixes it with 先 (sen), meaning before or previously. So a student is born for study, and the teacher is previously born, or older.

One that I haven't quite got my head around yet is the kanji for home: 家 (ie). 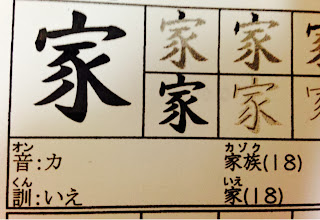 The bit at the top is a roof. This makes sense. The bit underneath? This depicts, apparently, a pig. Home? A pig underneath a roof. Or, a thing that as far I can see bears no resemblance to a pig, but is nonetheless a pig, underneath a roof. It wouldn't have been my first description of home (even in the medieval period, when these kanji were adopted) but maybe I'm strange.

But then I'm not sure how closely Naganuma sticks to original etymologies. Other contenders for most tenuous kanji explanation include:

Old man crouching on a child next to another old man holding a bag...? Of course - to teach! This would definitely not be allowed in schools nowadays, at least.

I'm guessing that this isn't the centuries-old root of the word soto (outside) either:

Man with a cigarette about to be crushed by a giant cigarette.