Things I thought I knew about sumo wrestling before I watched it:

It consists of fat Japanese men wrestling in nappies.

Things I found out from going to a sumo tournament:

Fat's not the word. Even the biggest sumo wrestlers (rikishi) live on a healthy-ish diet of 'chankonabe', or meat and vegetable stew. They just eat a lot of it. The result is that under their layer of fat rikishi are enormously muscular, which makes them surprisingly graceful - at least inside the ring. Judge for yourself, from the photos I took at the tournament: 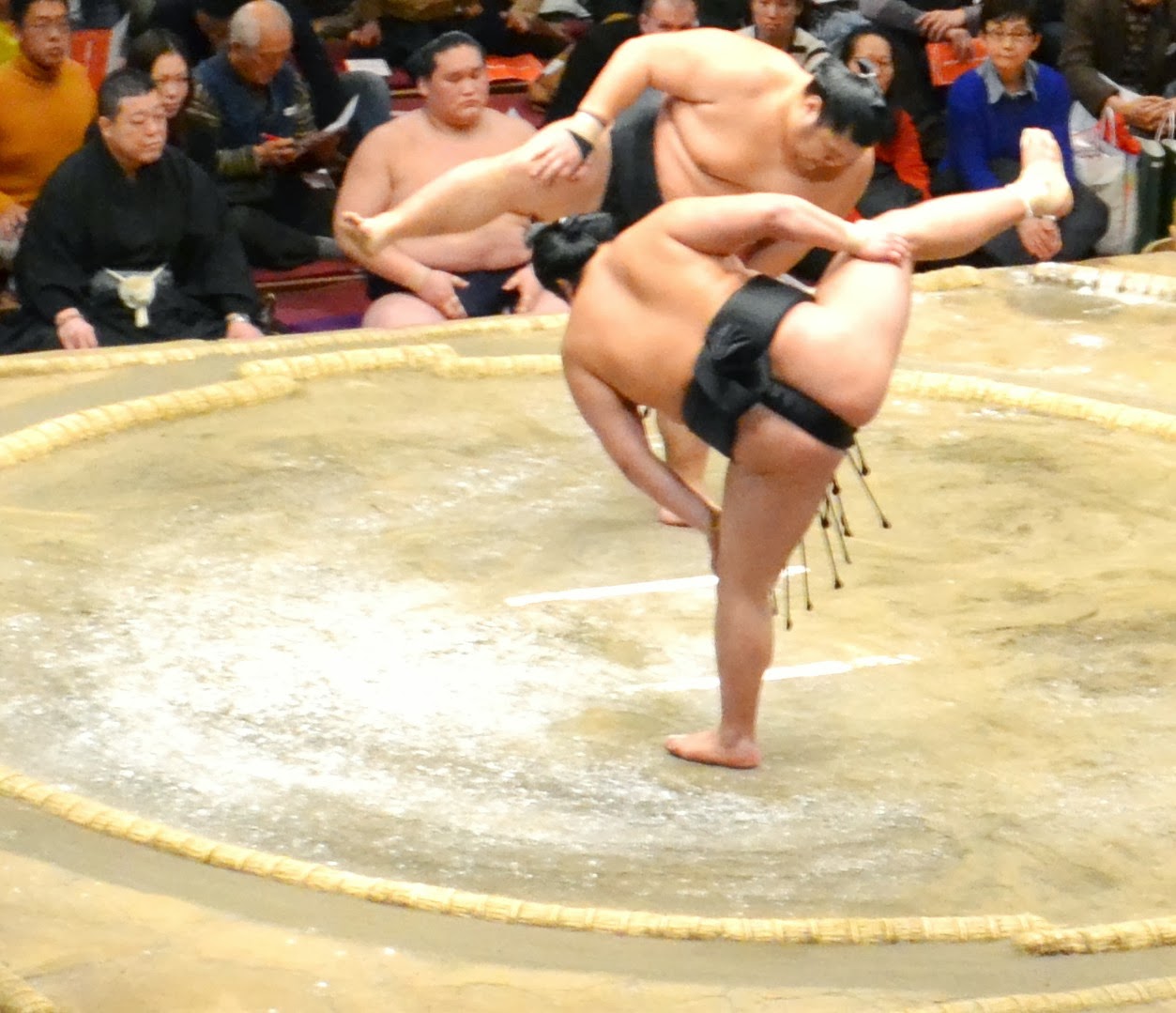 The men aren't actually all that big. Some are pretty small. There are no weight divisions in sumo, which means that a small wrestler can sometimes find himself up against someone twice his weight. Eep.

Rikishi aren't always Japanese. Japan may be the only country where it's an official sport, but wrestlers of various nationalities compete.

It isn't just men pushing each other around in a ring: both the sport and the wrestlers' lives are highly regulated. Each little detail, from the wrestlers' hairstyles to the slippers that they wear, is chosen for them and steeped in tradition and ritual. Rikishi live together in 'stables' and on the rare occasions that they appear in public must wear full traditional dress of cotton yukata and wooden slippers (geta). Geta make a loud 'clip-clop' noise on the ground, and so one of the rewards of moving up the sumo ranks is that straw slippers can be worn and the wrestler can avoid sounding like a horse. 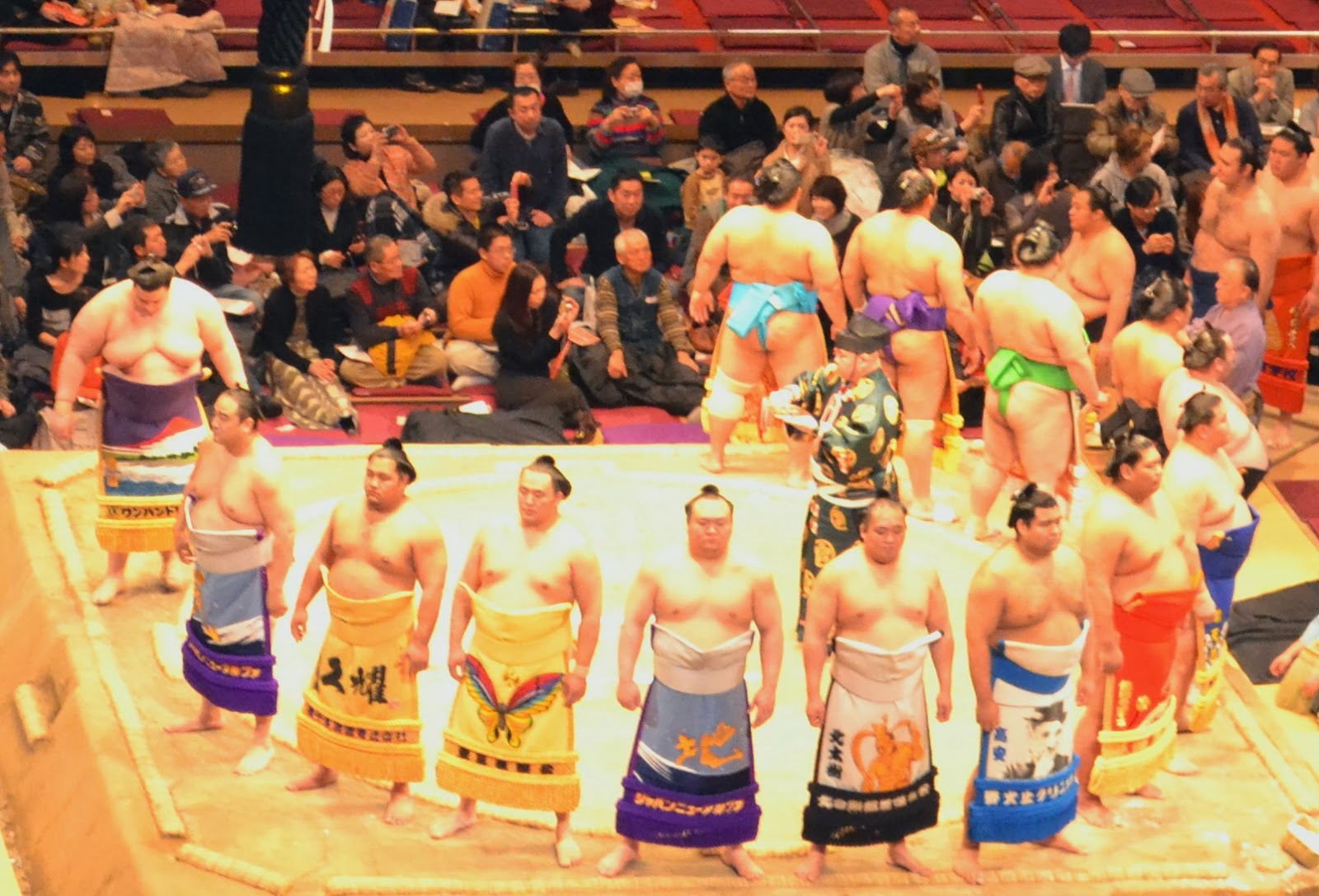 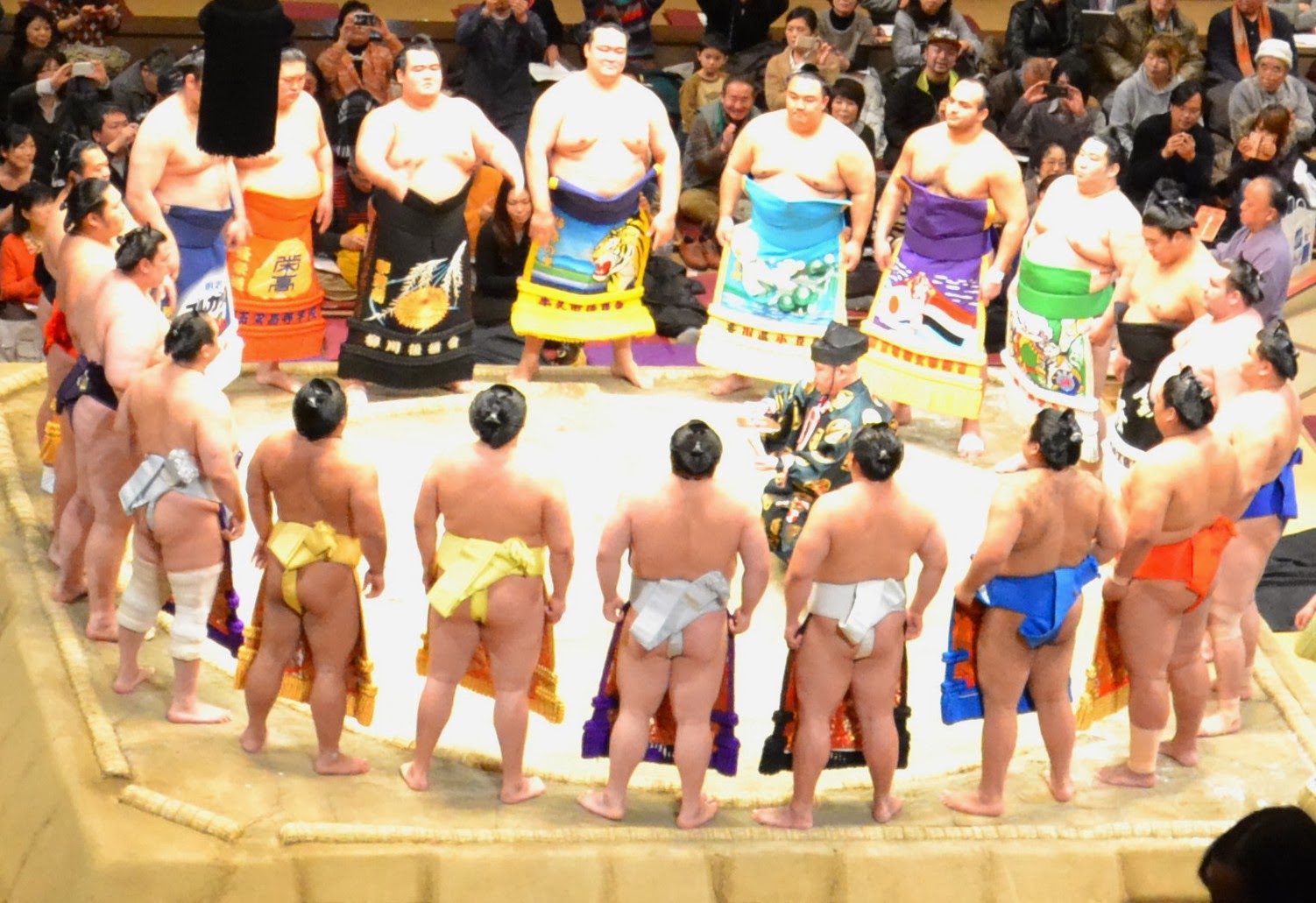 The outfit that wrestlers wear in the ring? Not (surprise surprise) a nappy, but a silk belt or 'mawashi'. Nowadays if a rikishi's mawashi completely unravels in a bout he is immediately disqualified - a rather ignominious end to the match. However, this is apparently due more to western awkwardness about nudity than Japanese tradition. In fact Japan is pretty OK with nudity, doubtless a result of the onsen culture. 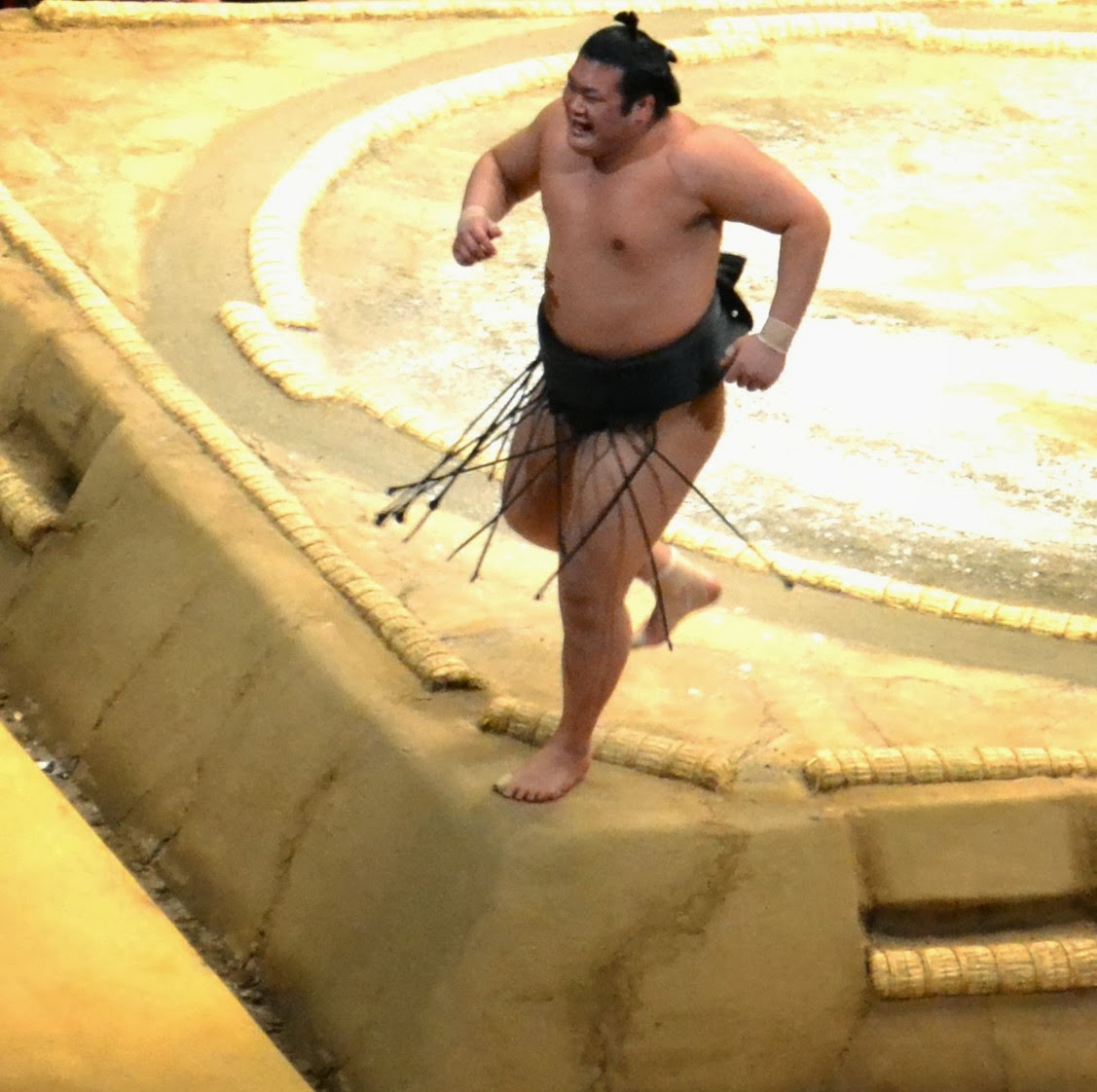 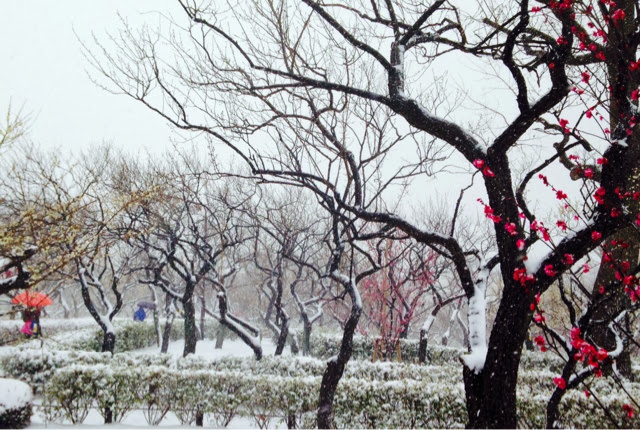 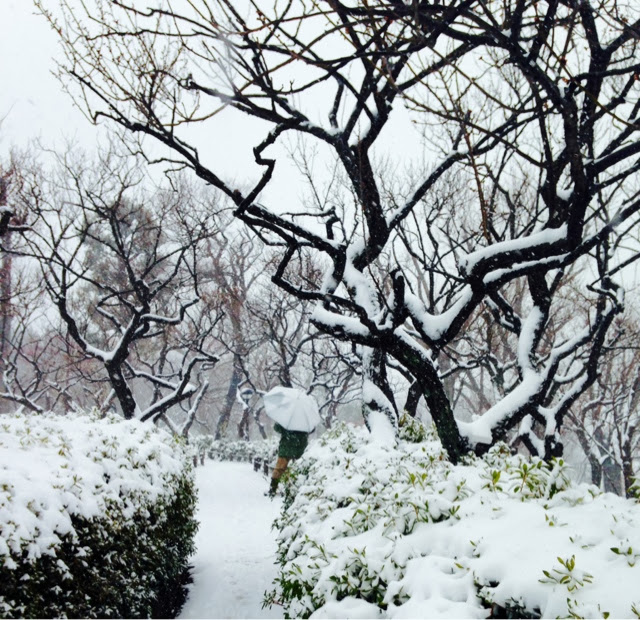 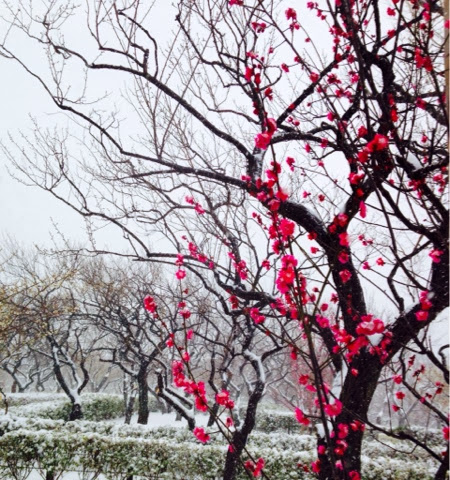 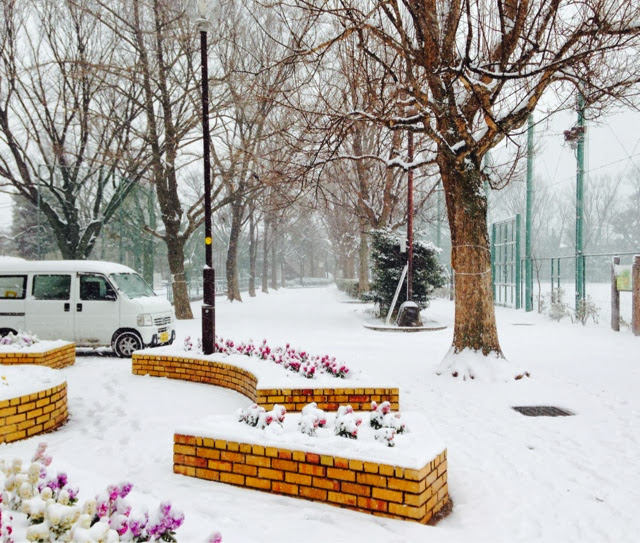 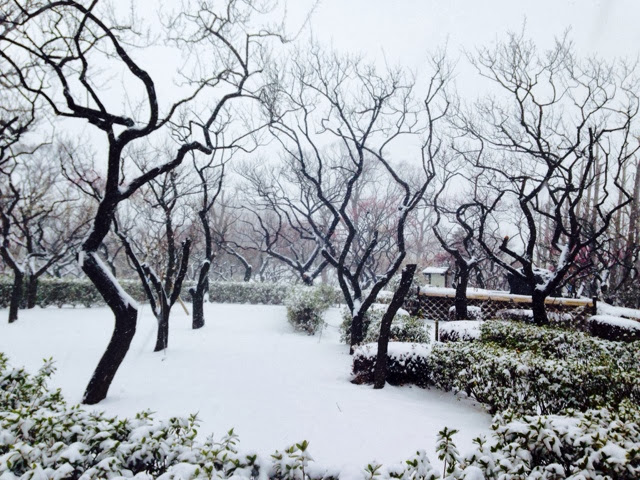 Ode to a kotatsu

Japanese houses are rarely insulated and retain almost no heat. So despite the swanky-sounding name, a Japanese 'manshon' is, in winter, pretty much a glorified refrigerator. Ours is currently covered (windows and doors at least) in many layers of bubble wrap - the hyaku en (60p) per roll answer to double glazing which is effective but does get a few funny looks from the post/ pizza man.
So this week we got a kotatsu, in a bid to keep warm through the storms and snow that will apparently arrive tomorrow. This is a kotatsu (not ours) on traditional tatami flooring: 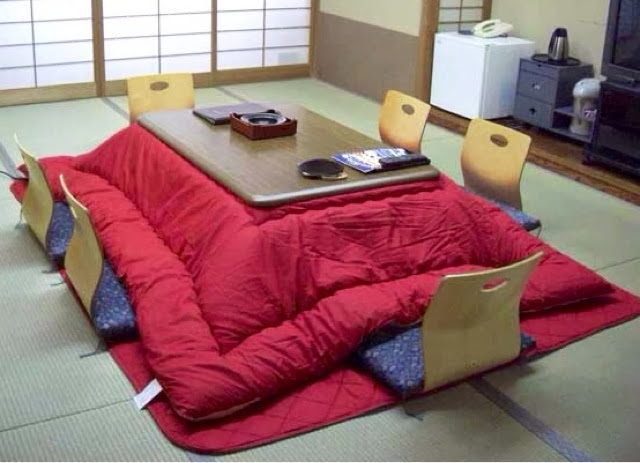 The best bit about kotatsus, and what's not clear from the picture, is that inside the table there is an electric heating element. So a kotatsu is a heated table with removable blankets both in the middle and underneath, which has apparently - thank you wiki - been around in Japan in one form or another since the 14th century. The idea is to sit around on floor cushions (zabuten) with your legs under the blanket, and keep warm without wasting money heating your whole apartment/ house, whilst still being able to do things like work, eat, watch films etc, thanks to the table-top.
This is the current state of ours: 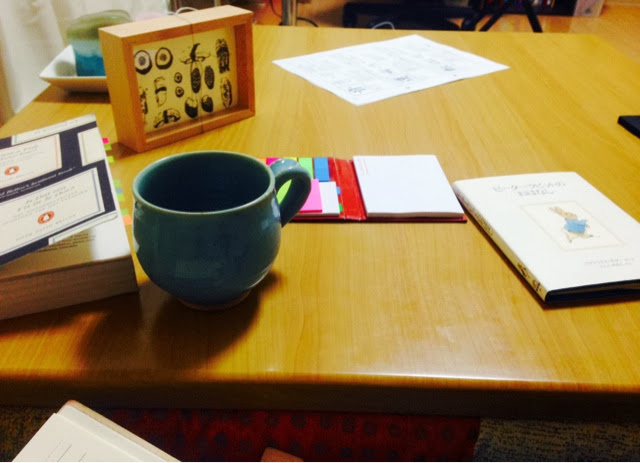 The book on the right is Peter Rabbit, or ピーターラビット (Piitaa Rabitto), as having finished A Very Hungry Caterpillar I have decided to make the leap from 3- (??) to 6-year-old Japanese child. Either that or I'll transform into a cat, having now started to take naps under the kotatsu in typical Japanese cat-style.
Posted by amenimo at 04:41 No comments:

Tonight I ate horse sashimi. I.e. a slice of raw horse. It didn't taste like chicken.
Posted by amenimo at 06:38 No comments: 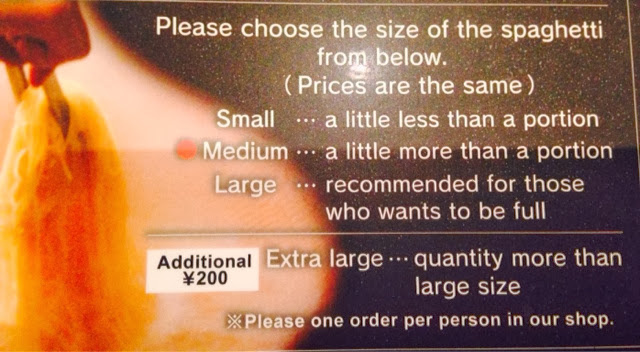 So what's a portion then?
Posted by amenimo at 01:25 No comments:

Not long before moving to Tokyo I watched Lost in Translation. I wondered whether it was a good idea for me, then pretty nervous about the move, to watch a film about feeling alienated in my soon-to-be home, and whether soon it would be me sitting in a hotel room feeling isolated in the huge city.

I arrived in September, speaking little to no Japanese; just enough to say 'good morning', 'good evening', and 'thank you.' (I recently found the notes I made in my first Japanese lesson - a hesitant and misspelled collection of nouns, with nothing yet to connect them): 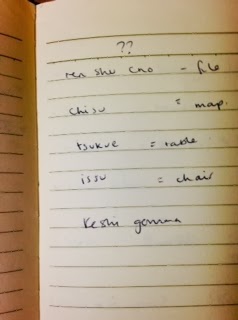 Despite this people were friendly and patient, even when I must have sounded quite rude. I approached strangers and said, in what I then thought was polite Japanese, things like: 'Eki wa doko desu ka?' Later I found out that this is pretty blunt, along the lines of: 'TELL ME WHERE THE STATION IS', and that much better would be: 'Sumimasen, watashi wa eki e ikitai desu ga...' - 'Excuse me, I'd like to go to the station but...', leaving them to fill in the directions part.

Nothing has made me feel more at home than the convenience store (conbini) where I live. It is so close to the flat that it has sort of become an extension to our living room, where we pop down in slippers if we fancy an ice cream or ball of fried octopus.

There is an oldish man who works there. Once I went in with a big camera around my neck and he pointed, chuckling: 'Cam-e-ra man?' It was the first time he had said anything other than the usual welcomes, thank yous, etc, and so I let the dubious implications for my appearance slide. Before Christmas he appeared with two satsumas: a present. He'd realised that I live with the other gaijin who I sometimes shop with, and so gave one for me and one for Jim, too. Shortly after Christmas I asked whether they had any apples, and was told, literally, 'it is not excusable but we do not have apples.' Today, two weeks later, he came up to me and said, almost conspiratorially, 'ringo', pointing at some apples. I was more happy that he remembered than about the apples, and somehow emitted a high-pitched 'ooh', which he imitated before walking away laughing.

This is just one of many unnecessary, kind things that people have done since I've been here, which have no doubt helped to stave off the culture-shock and isolation promised in some films and forums. Our wonderful koto teacher, when I mentioned that I liked sweet things, the following week gave us this: 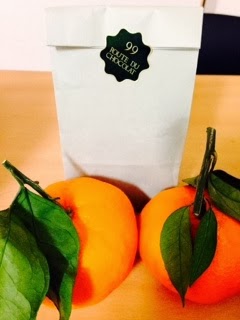 The waitress at a local cafe remembers that I like coffee with whipped cream, and helps with my homework; back in September our estate agent spotted a group of us having lunch and used a considerable amount of his own break to come into the restaurant and translate its menu for us.

... Do not exist in Japan, I'm convinced. In fact the 'weirdest' vending machine I've seen during 4 months living here is this one stocking batteries, which I saw this weekend in Nikko. 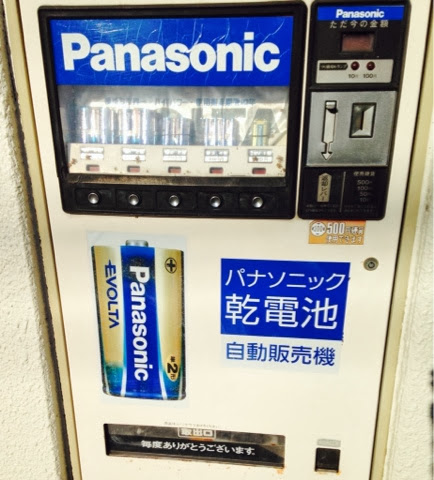